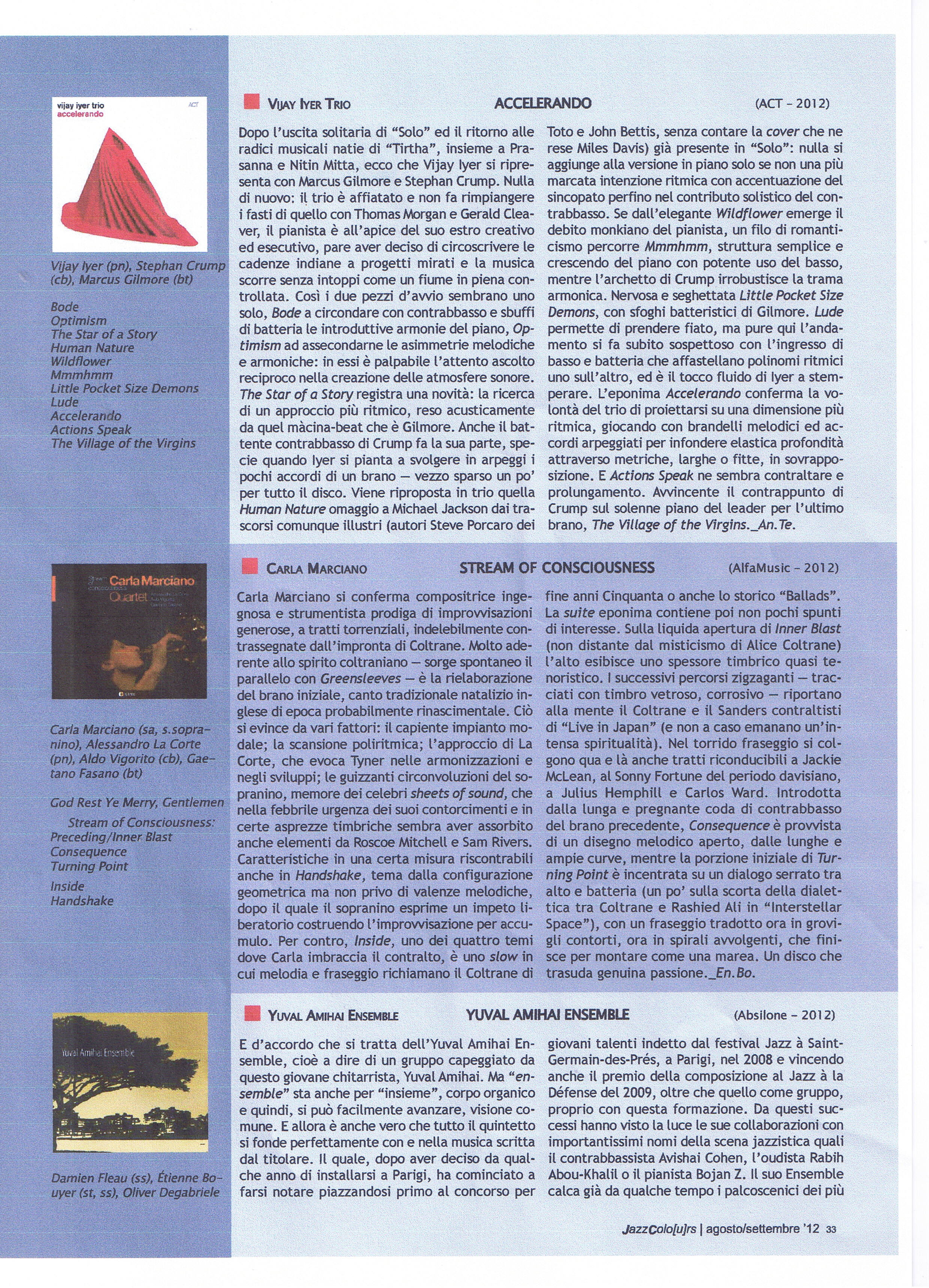 Carla Marciano confirms her unique technical ability as an ingenious composer and instrumentalistwho is extravagant in performing lengthy improvisations, which are at times torrential, indeliblyinfluenced by Coltrane. Her style is very close to the Coltranian spirit – it comes natural to compare it with Greensleeves – this is the re-elaboration of the first piece, a traditional English Christmas carol dating back probably to the Renaissance period. One can clearly deduce this from several factors: its abundant modal architecture; the polyrhythmic scansion; La Corte’s approachwhich evokes Tyner in its harmonisation and developments; the darting convolutions of the sopranino sax, recalling the famousSheets of Sound, that in the restless urgency of its contortions and in certain parts there are elements of harshness in its register that seem to have also been influenced by Roscoe Mitchell and Sam Rivers. To a certain extent, these characteristics can also be found in Handshake, a piece rich in geometric constructions yet which is not devoid of melodic worth, following which, Marciano blasts out a liberating outburst on the sopranino sax, constructing the improvisation by gradually building it up. In addition to this, Inside,one of the four pieces where Carla takes up the contralto sax, is a slow piece, the melody and phrasing of which recall Coltrane towards the end of the 1950s or even the historical piece ‘Ballads’. The eponymsuite is also full of interesting features. Upon the fluid opening bars of Inner Blast (closely resembling Alice Coltrane’s mystical nature) the alto saxophone emits a deep timbre very similar to that of a tenor sax. The following winding musical paths– traced by means of a glazy, rustyregister – recall Coltrane and Sanders performing on the contralto saxophones in ‘Live in Japan’ (and not by chance do they transmit an intense spirituality). In the torrid melodic phasing, here and there, one can also findelements recalling Jackie McLean, Sonny Fortune during the Davis period, Julius Hemphill and Carlos Ward. Consequencehas a clear melodic pattern, introduced by the long and meaningful double bass participation in the previous piece,with long, wide curves, while the initial part of Turning Point focuses on a fast-paced musical dialogue between the alto sax and the drums (rather similar to the active musical interaction between Coltrane and Rashied Ali in ‘Interstellar Space’), with phrasing translated first into intricate twists, then into winding spirals that come to a conclusion by gradually building up to a climax. This is a CD oozing with genuine passion.